It looks like this Spring Hill Florida couple will be forced to have Sex with others after all. You can bet that a restraining order will be placed into effect, prohibiting them from any contact with each other. I don't know all the facts in this case, only what I have read. But if they are Swingers, who have parties to meet and have sex with other people, why fight when it happens? Maybe they just had too much to drink, or maybe this is "normal" behavior for them, who knows ? But one thing they will be able to "count on"  is a Pasco County or Hernando County Restraining Order. Spring Hill is north of Tampa, I am not sure what county it is in. Both people were arrested for Domestic Battery. 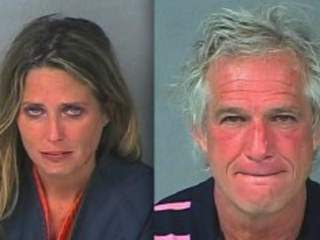 Posted: 08/22/2012
Last Updated: 22 hours and 6 minutes ago
SPRING HILL - A Spring Hill couple’s sex romp turned into a nude, violent war after the swingers turned on each other, Hernando Today reports.
When deputies arrived on the 5000 block of Patricia Place, they found Tina Norris, 39, and James Barfield, 56, scratched up, bloody and still naked early Sunday morning.
Authorities said Norris was upset that her boyfriend was having sex with another woman while Barfield was angry that his girlfriend was in bed with two men.
The two began to fight each other from one end of the house to the other, knocking down furniture along the way, according to roommate who lives in a spare room at the home.
The witness said the two had a weird relationship and the couple were “equally aggressive to each other,” she told deputies.
When the roommate got Barfield off Norris, Norris went after Barfield, and they kept attacking each other several times before separating.
The three swinger participants left the home by the time authorities arrived.
Norris sustained a bloody lip and Barfield had scratches all over his body.
Deputies say the couple was very drunk, uncooperative and stark naked.
Norris refused to put clothes on when a deputy asked her to do so.
Norris told deputies that her boyfriend beat her and there was blood everywhere, but authorities said the only blood she had was on her lip.
Both suspects were arrested about 6:00 a.m. and charged with Domestic Battery.
Norris was additionally charged for resisting arrest.
Read more: http://www.abcactionnews.com/dpp/news/region_citrus_hernando/spring_hill/naked-spring-hill-couple-arrested-after-swinger-session-ends-in-brawl#ixzz24NJ2Hmle
Posted by Chris Tucker at 9:30 AM 1 comment:

Our blog is against the misuse and abuse of restraining orders. But in the story below, it is alleged by the Pasco County Sheriffs Department that this person beat his father. Why was he only charged with domestic battery, and not felony assault and battery ?  When the police arrived, the father was bleeding, and was hit 15 times. Under Florida law, striking a person multiple times is supposed to be a Felony!  This alleged parent beater get IMHO a slap on the wrist, and a paltry 250.00 bond! Yet people who are in Love sometimes violate a restraining order with no violence at all, and get upgraded to stalking charges, with no bond

A man upset his parents didn’t cook dinner for him was arrested Saturday morning after beating his father, according to the Pasco Sheriff’s Office.
About 12:25 a.m. Saturday, Kevin Michael Reyes, 27, confronted his parents at their 15055 Lancer Road home in Spring Hill. Reyes, who lives with his parents, said he was “starving” and was upset no one had cooked dinner for him.
Reyes began to argue with his father, Tim Thomas, when he attacked him, deputies said. Thomas said he believes he was punched 15 times in the face with a closed fist and after being pushed to the floor, was kicked several times.
An arrest report said Thomas, 40, was bleeding from the right side of his face as a result of the fight.
Reyes, who remains in custody at the Land O’ Lakes Jail, told deputies he blacked out and doesn’t remember beating his father. He’s charged with domestic battery. Bail is set at $250.
Posted by Chris Tucker at 11:54 AM 1 comment: